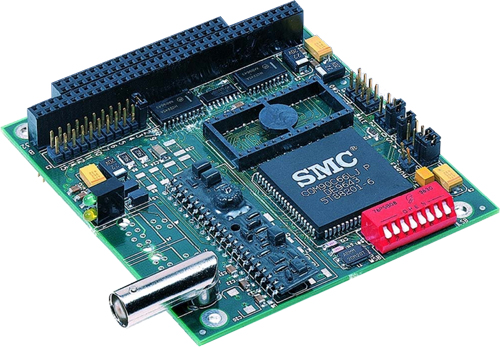 ARCNET is classified as a token-bus LAN operating at 2.5 Mbps while supporting 255 nodes. Interfacing ARCNET to a host computer usually requires a Network Interface Module which plugs into the host computer's bus.

At the core of the PC10466's design is the 16-bit COM90C66 ARCNET controller chip. New features include command chaining and sequential I/O mapping of the internal RAM buffer. There is usually no requirement for wait-state arbitration. This product is backward compatible with earlier generation 90C26 and 90C65 8-bit ARCNET controllers and will operate as a replacement. However, to use the expanded features of the COM90C66, an improved software driver is required.
There is a dual LED located on the PC10466. The yellow LED indicates that the PC10466 is being accessed via its I/O address. The green LED indicates that the PC10466 is transmitting ARCNET traffic on the network. The PC10466 also has a piano style DIP switch so that node addresses can be easily reassigned without removing the module.

The PC10466 is available in five versions. The PC10466-CXS supports coaxial star configurations requiring external active or passive hubs. In a two node system, simply connect the two CXS Network Interface Modules together using RG-62u coaxial cable. The length of the cable cannot exceed 2000 feet. If more than two NIMs are used on a network, either an active or a passive hub is required.

The PC10466 Series of NIMs has no drop-in replacement. This series used the COM90C66 ARCNET controller chip that is no longer available.

For users willing and able to modify their application-layer software, the PC10422 Series could possibly substitute in some cases. The PC10422 uses the COM20022 ARCNET controller chip instead of the COM90C66 that was used on PC10466 NIMs. Due to the differences in the controller chips, if a PC10422 is substituted for a PC10466, the ARCNET functionality will change in the following ways.

Programmer guides and sample applications are included in any of the free downloads available here.

PC10422 NIMs provide the same transceiver options as PC10466 NIMs except that fiber ports are no longer supported. If you need fiber connectivity for a PC10422 NIM, you should use an AI Series hub for the media conversion.