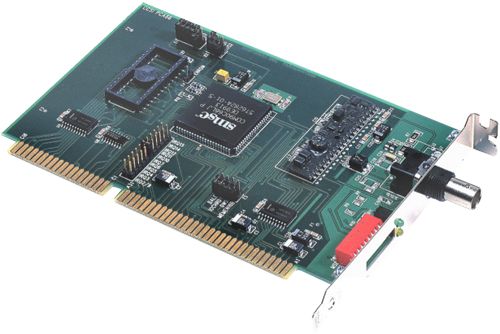 The PCA66 is manufactured with the 16-bit COM90C66 ARCNET controller chip with improved attributes over earlier ARCNET chips. New features are command chaining and sequential I/O mapping of the internal RAM buffer. There is typically no requirement for wait-state arbitration. The PCA66 is backward compatible with earlier 90C26 and 90C65 8-bit ARCNET controllers and will operate as a replacement. In order to use the expanded features of the COM90C66, an enhanced software driver is necessary.

Each PCA66 module has two LEDs on the board. The green LED indicates that the module is transmitting data on the network, and the yellow LED indicates bus access to the module. The PCA66 also has an external DIP switch so that node addresses can be easily reassigned without removing the module.
An 8-bit DIP switch is used to set the ARCNET node address. Any value except zero is a valid ARCNET node address. If zero is set in the switches, the ARCNET LAN adapter will disable its transmitter and not join the network until a non-zero node ID is set via software. The RAM buffer cannot be accessed when the node ID is zero.

Five versions of the PCA66 exist. The PCA66-CXS supports coaxial star configurations requiring external active or passive hubs to extend a bus segment beyond 1000 feet. The PCA66-CXB accommodates coaxial bus configuration usually requiring no hubs. The maximum segment length is 1000 feet, and the maximum number of Network Interface Modules that can be connected to a segment is eight. Other models are the PCA66-FOG that supports fiber optic cable with either ST or SMA connectors. With fiber optic connections only star and distributed star topologies are supported. The PCA66-TPB supports twisted-pair bus cabling using RJ-11 or screw terminal connectors.

The PCA66 Series of NIMs has no drop-in replacement. This series used the COM90C66 ARCNET controller chip that is no longer available. Second-hand PCA66 NIMs might be obtained from vendors of used ARCNET equipment, but Contemporary Controls does not know of any such vendors.

PCX20 NIMs have free null-stack drivers available for Windows NT/95/98/ME/2000/XP use of NDIS drivers is strongly discouraged. Each downloadable driver file is actually a set of files which includes a programmer guide and sample applications. PCX20 drivers, more driver information and utilities are available here.

PCI20U NIMs have free null-stack drivers available for Windows NT/95/98/ME/2000/XP/Vista use of NDIS drivers is strongly discouraged. Each downloadable driver file is actually a set of files which includes a programmer guide and sample applications. PCI20U drivers, more driver information and utilities are available here.

PCX20 and PCI20U NIMs provide most of the same transceiver options as PCA66 NIMs except that the twisted-pair star option is no longer supported and fiber ports are no longer supported. If you need to replace a PCA66-CXS, you should use a 93-ohm terminator attached to a Tee on the BNC connector of the replacement NIM. If you need fiber connectivity for a PCX20 or PCI20U NIM, you should use an AI Series hub for the media conversion.