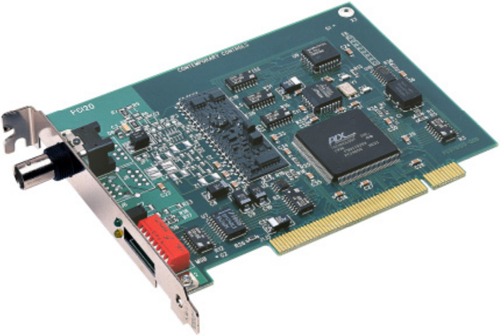 The PCI20 incorporates the newer COM20020 ARCNET controller chip with enhanced features over the earlier generation ARCNET chips. New performance and integration enhancements include command chaining operation and an internal 2K x 8 RAM buffer. There is no requirement for wait-state arbitration.

Each PCI20 module has two LEDs on the board. The green LED indicates that the module is transmitting data on the network and the yellow LED indicates bus access to the module. The PCI20 also has an external DIP switch so that node addresses can be easily reassigned without removing the module.

In almost all cases, a PCI20 NIM can be easily replaced with a PCI20U NIM. The PCI20U uses the COM20022 ARCNET controller chip which is backward compatible with the COM20020 chip that was used on the PCI20s. Therefore, you will experience no software issues as a result of substitution because your software will not be able to distinguish between the two devices. There are, however, physical differences between the two products and these differences (usually of minor or no significance) are explained below.

The PCI20U was made smaller than the PCI20 so that the newer card could fit into a miniature computer case. The smaller size results in three issues that may be of concern to some users:

The PCI20-FOG-SMA and the PCI20-FOG-ST have no direct substitutes. If you need fiber connectivity for a PCI ARCNET NIM, you should use an AI Series hub for the media conversion.

The PCI20U comes pre-attached to a standard (large-height) bracket for convenient installation in a traditionally sized computer case. However, a smaller bracket provided with the card can be used in place of the standard-height bracket.