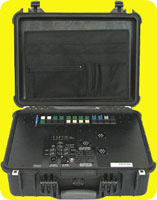 The increased use of DCDs has motivated Dataline to develop new models that meet today's commercial airline carry-on regulations. The DCD Brief Case (DCD-BC) is an easy-to-use, robust and lightweight mobile unit capable of scaling up to support a forward headquarters. The DCD-BC and additional network devices are mounted in Pelican 1520 cases, backpacks and other cases for transport and operation.

The Base Station (DCD-5000) provides an entry point into a customer designated network or networks for the mobile packages which connect to the base station via a defined communication path such as Satellite, ISDN, or the Public Internet. The base station can scale up or down to meet specific requirements.

"We found that Contemporary Controls' EICP8M-100T, eight-port managed switch, is more durable with the most ports in a small form factor," said Huisenga. "The physical size of the switch is a big issue given we had to integrate it into a small package. The switch is roughly 5" H x 3" W, just compact enough to meet the space restrictions. It met the requirements of our customers for a small form factor which incurred size and weight savings for Dataline."

In addition to the compact size, the EICP8M had to perform well in environments like Iraq, Afghanistan and Africa. "In these environments, the aim of the switch is to improve the exchange of information," says Huisenga. "The switch hasn't failed to respond. We are extremely satisfied."

These are not the only reasons why the use of the EICP8M-100T switch benefited networking capability. "Added bonuses were features including VLAN support, port mirroring and temperature monitoring," he confirmed.

By definition, a VLAN allows the logical separation of network traffic-providing higher performance and higher network security. Ports on the switch may be assigned to individual VLANs, thereby restricting VLAN traffic. VLANs only allow communication between devices in the same VLAN. Huisenga commented that the VLAN capability allowed them more flexibility in meeting security requirements requested by some customers without incorporating another device to provide the security.

By using the port mirroring feature, port traffic from one or more ports can be replicated on another port for monitoring purposes. In this respect, an individual will employ port mirroring to help diagnose network problems.

Huisenga said his company has had requests for temperature gauges which require another physical device within the DCD. This Ethernet switch performs the temperature monitoring function allowing Dataline to decrease the number of components installed in the DCD. "Now we've reduced an entire subsystem within our deployable communications packages," he added.

Both copper and fiber versions are available in the EICP8M Series for specific applications where 0° to +60°C temperatures are expected. Designed with conventional features usual in Plug-and-Play (PnP) switches, the EICP8M also includes such important benefits as RapidRing®, trunking, Quality of Service (QoS), SNMP (Simple Network Management Protocol) and a programmable fault relay that can be connected to supervisory systems. Individual port parameters and other feature settings are configurable. Huisenga said they would investigate the use of RapidRing and trunking-solutions for applications requiring maximum uptime for an Ethernet communications network.

This series is designed with an interactive web server, accessible from any Internet compatible PC on the local network. Configuration is done either from a web browser or through a console port connected to a Windows-based terminal emulation program such as HyperTerminal. Port parameters (data rate, duplex, and flow control) can be pre-set via the console port or auto-negotiated.

Each model in this series performs as an SNMP agent allowing access to information concerning the status of its various ports. The SNMP agent is comprised of a collection of managed objects that can be queried by a SNMP manager to indicate the status of the network or any particular device. When this data is displayed in an easily understood format, operators and maintenance personnel, at a central location, can check the entire network by observing selected devices and detect potential problems before they occur.

Either straight-through or crossover cables may be used to connect any of the Auto-MDIX ports to NICs or another hub. Each port has an LED showing link/activity/data rate by color: green for 100 Mbps and yellow for 10 Mbps. Flashing indicates port activity. One power LED is provided.

The EICP8M Series is shipped with a DIN-rail clip for installation with a TS-35 DIN-rail. If direct mounting to a sub-panel is needed, an optional panel mounting bracket, shipped with the product, can be installed after removing the DIN-rail clip.

A choice of network management software (iSNMP™ and IntraVue™) is available as well.