With the launch of the "SaTL" system (Satellite Transmitter Link) in 2005, Clear Channel Satellite strengthened its position as the leader in satellite communications. Their state-of-the art facility is located in Englewood, Colorado with geographical redundancy that is manned 24/7/365.

The project goal of the SaTL was to design a bidirectional satellite-based system and related components to install at remote sites across the continental United States plus Hawaii, and connect them via satellite to the Englewood facility. It would belong in the XtremeSat product line which is a disaster recovery and WAN protection system for Clear Channel radio stations.

In many markets in the worst kind of weather, we lost audio to our transmitter sites or we lost WAN connectivity for days and we had to take action, said Mike Sanchez, Clear Channel Satellite Senior Network Engineer. To maintain audio format to the transmitter sites at all times, Clear Channel decided to use Ethernet as the primary technology because of its wide variety of protocols and signals that can be sent across it. To help reduce the cost of installation and maintenance, engineers selected Plug-and-Play (PnP) switches from Contemporary Controls in Downers Grove, Illinois. Contemporary Controls is a manufacturer of these industrial-grade Ethernet devices that operate right out of the box and auto-negotiate all communication parameters such as data rate, duplex and flow control.

The satellite-based system is equipped with encoders at the studio site, an SaTL at any transmitter site and one repeating hub located at the Englewood facility. This system allows the company to provide WAN connectivity and audio programming to Clear Channel studios and transmitter sites despite land lines, T1's and microwave links failing.

Sanchez said the company's IT team in San Antonio monitors WAN performance on a 24/7 basis. If any SaTL within a market loses WAN connectivity, the IT team will contact Clear Channel's Network Operations Center (NOC) to increase the bandwidth of an individual system. This would enable the SaTL to be used as as substitute for the WAN land lines until normal connectivity resumes. "The NOC knows the system inside and out and is responsible for preventive maintenance at the remote sites," said Sanchez.

Engineers developed the SaTL so each unit has its own IP address and web server, and has an output that can be remote controlled via a web interface. Using this address, it can be instructed remotely to trigger an external relay to change program feeds. An example of this is when a receiver at a tower site in New Orleans is commanded to receive programming from the Baton Rouge studios (as it actually did during Hurricane Katrina).

From an engineer's perspective, the network is a star topology beginning from the repeating hub at the Englewood facility with connection to each of the remote sites. More than 500 of Contemporary Controls' EIBA BAS Switches are deployed in the field.

"We ship the switches to our manufacturing plant, and technicians place one device in our 1RU SaTL chassis among all the other components," explained Sanchez. "Each remote facility has an SaTL. Installation varies considerably from site to site because of specific issues in order to prevent loss of network connection or any interference."

The BAS Switch connected the satellite modem to the audio decoder to a relay control box and then to an external port on the SaTL itself in the system. The switch was enclosed among the other components in a case called the "XTL."

These DIN-rail switches (the EIBA5-100T/R) addressed a key concern and that was convenient mounting. Office-grade equipment is intended for desktops, requiring a separate power supply powered from a 120/230 Volt AC mains circuit. In this situation, a shelf would be constructed to mount the unit and a receptacle would be installed inside the panel. In this application, the EIBA5-100T/R switch mounts in a single rack case called the "XTL" and operates from the same voltage range that powers the other equipment. 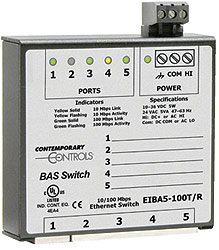 "Overall", said Sanchez, "a small form factor and convenient mounting plus a wide voltage range won us over compared to other manufacturers' switches."

Clear Channel engineers knew the switch had to occupy a small amount of space inside the case. With its 3.3"H x 3.5"W (84 mm x 89 mm) size, the BAS Switch product was the perfect fit. DIN-rail mounting was essential because the relay box was built to have DIN-rail capability.

"It was nice to have another device snap into DIN-rail along side it," said Sanchez. "It made mounting easy."

Finally, the engineers realized the product had a wide voltage range which is 10-36 VDC or 24 VAC (± 10%) 47-63 Hz. "Previously, we used switches designed with a narrow voltage range," explained Sanchez. "They were outside the 24 Volts we we were trying to work with, and we encountered problems."

The compact and low-cost EIBA switch provides five 10/100 Mbps shielded RJ-45 ports. Each port is Auto-MDIX compliant and can operate as an uplink port, eliminating the need for crossover cables.

The LEDs on this unit faces the technician for easy network troubleshooting. The label on the device can be written upon so port connections can be documented as to the location of connected equipment.

"With the BAS Switches, we have a highly cost-effective system with proven reliability," said Sanchez.