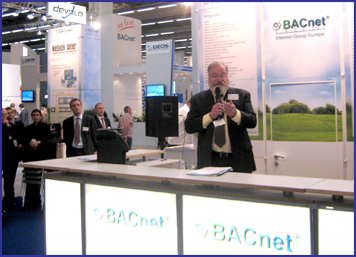 June 2011 - Anyone who is active in the BACnet community would remember Bill Swan – a dedicated advocate for BACnet. He was also a nice guy. The last time I saw Bill was during Light+Building 2010 in Frankfurt, Germany. In addition to his duties at Alerton, Bill was also active with the BACnet Interest Europe (BIG-EU). The BIG-EU was having a press conference at their L+B stand and I took this picture of Bill espousing the benefits of BACnet. I believe no one took a picture of his presentation so he was appreciative that I sent it to him.

Although I knew Bill from attending several BACnet events, we got to know each other better in Frankfurt when we were both stranded after our flights were cancelled due to ash from the 2010 eruption of Iceland's Eyjafjallajökull volcano. After L+B, he would text me and ask, "Did you get out?" If not, let's have dinner. Well, I did not get out for five days, so we had a few dinners.

My best memory of Bill was sitting in the Römerberg, which is the central square of Frankfurt's Altstadt, drinking a spiked apple cider that was more potent than beer. We were discussing the "old days" of 8-bit processors such as the Z80 and 8080 and having a good time when I started to feel the effects of apple cider. I have to admit that Bill could hold his beer and his apple cider quite well. I told Bill that I had to be back in Europe in one month and that I was going to show the volcano who was boss. Bill remembered that boast and wrote about it in his BAC Cave blog when he related his experiences with the volcano. He concluded his blog article with this paragraph.

I applaud George Thomas for his plans to return to Europe shortly. He says, "I want to show the volcano who is boss." Good luck, George!

Well I did go back and I beat the volcano by six hours before the Birmingham, UK airport was closed. I will surely miss Bill.

The Skorpion Series of Ethernet Switches Just Got Smarter

Essentials: BACnet/IP to MS/TP Router or BACnet MS/TP Repeater - What is Best? (PDF)