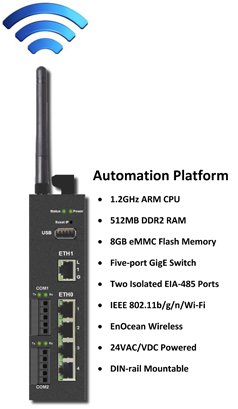 June 2015 - Bennet Levine, R&D manager, Contemporary Controls led a presentation on the Automation Platform at the recent community-focused Project Haystack Connect 2015 Conference. Haystack Connect 2015 brings together systems integrators, technology providers and end users from throughout the world to support the Haystack standard and to addresses one of the key challenges facing the industry today - the ability for device data to be easily shared among different applications.

The Automation Platform is intended as an OEM open platform for the building and industrial automation industries. Its design is flexible in both hardware and software and powerful enough to serve in a supervisor, integrator or router application. Pre-loaded with Linux OS, it can be modified by our technical staff to meet just about any requirement.

Similar to a PC but more reliable, the Automation Platform is hardened for the heavy demands required for building automation. The platform has no spinning hard drives, no fans, and it fits into the enclosures of the building automation system. Like a PC it has an operating system, hard drive (solid state, not spinning) and ports. The ports are Ethernet, WiFi, EnOcean, EIA-485, etc.

The Automation Platform provides a 1.2Ghz ARM9 processor; 512MB RAM and up to 8GB eMMC on-board flash memory. A built-in five-port Ethernet switch eliminates the need for a separate Ethernet switch in the panel. Two optically-isolated EIA-485 serial ports can connect to either BACnet MS/TP or Modbus RTU networks. BACnet/IP and Modbus TCP are supported via Ethernet ports.  The unit supports IEEE 802.11b/g/n Wi-Fi and EnOcean wireless as an option. The compact unit operates from a 24 VAC/VDC supply and is DIN-rail mountable and intended for standard control panels

"Many companies in our industry provide software applications that run on PCs. These same applications can be ported to the hardened Automation Platform which is better suited for panel installations," states Levine.

Automation Platforms should take advantage of open source projects that assist in the creation of building automation applications. The Linux operating system has a very large community behind it and usually powers most higher-end embedded devices. Open source software such as the open source BACnet stack has been used in many BACnet devices.  Other open source projects provide code for protocols such as Haystack, Modbus, EnOcean, SNMP, EtherNet/IP, and KNX.  Raspberry PI, BeagleBoard, Arduino, may be thought of as being Automation Application Platforms. These are all incredible devices; however, they do not provide numerous features such as isolated EIA-485 ports, 0-60C operation, FCC/CE, UL, DIN rail mounting, 24VAC/DC operation, lifecycles required for this industry (hardware that does not change every six months).

"However, one advantage provided by application platforms such as the Raspberry PI is the open source community that has been formed to help support these and other similar efforts," states Levine.

The presentation can be viewed online. More information about the product can be found on the Automation Platform Data Sheet.