What's Up with the Internet of Things?

April 2016 - In today's society, the Internet is one of the most important tools and as the years have gone by more and more gadgets and gizmos have made their way online. From smartphones and tablets to watches and shoes, the Internet is creeping its way into consumer's homes and owner's businesses in every which way possible.

With the migration of so many new devices going online the Internet of Things (IoT) was born.

The IoT has grown rapidly since its inception and in order to successfully navigate the crowded marketplace, it's important that companies understand as much about the IoT as possible.

Keeping Up with the Industry
Bennet Levine, Research and Development Manager at Contemporary Controls, recently attended a conference on IoT titled "Internet of Things North America Conference" held by Remote Magazine. The conference detailed a comprehensive look at the IoT including its different subsets and areas of concerns for businesses and consumers alike including IoT in building and industrial automation.

Among the topics of discussion within the conference was a subset of IoT called the Industrial Internet of Things, or IIoT. The IIoT is where industrial systems have their data sent to the cloud, which according to Accenture, a management consulting services company, is expected to add more than $14 trillion to the global economy by 2030. Another interesting topic at the conference was open source data, where perhaps the most interesting discussion came from Jenny Tong of Google. According to Tong, a variety of government agencies are open sourcing their data and Google is providing search tools for users to openly sift through the data.

Keeping Your Information Safe
However, the most discussed topic during the conference was security. While the IoT is ever expanding, with new devices coming online every day, it's important to understand the risks associated with it.

While some devices like the Under Armour Speedform Gemini 2 smart shoes do not contain or push any sensitive data to the cloud (sends information similar to miles ran and elevation change) there are a variety of products on the market that do deal with sensitive information, like the Amazon Echo. The Amazon Echo not only lets users control their other IoT devices (like lights and thermostats) but also lets them order straight from Amazon using their default payment method.

"IoT security is a big concern. One fear is with the commercial IoT products that they will be low cost and, therefore, have poor security," stated Levine. "This would then allow them to be taken over by malicious individuals, and due to their large numbers, create a storm of viruses and Trojans on the Internet." 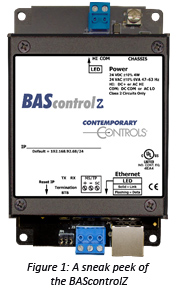 "We are testing using BACnet and Sedona in our soon to be released BAScontrolZ for an IoT concept with standard BACnet client devices such as Niagara Supervisors where the BAScontrolZ sends MS/TP points from connected devices through firewalls to the BACnet client which is located in the cloud," stated Levine.

The Challenges are Worth It
While the IoT has many challenges associated with it, there are also many benefits for businesses and consumers alike. We here at Contemporary Controls hope to bring a new aspect to the IoT and hope to make our customers lives a little easier.

Whats Up with the Internet of Things?