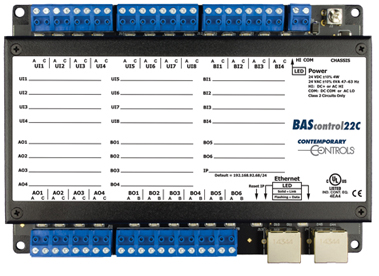 The new BAScontrol22C, which supports BACnet client capability in addition to the existing server functionality, is now available. Most BACnet devices are servers, which do not initiate requests to other BACnet devices other than an initial "I-Am" broadcast when first joining the network. The BAScontrol22C is a BACnet client, which means it can initiate requests and expect BACnet servers to respond to requests as data is exchanged.

"The BAScontrol22C gives users the ability to access point values and/or control other BACnet devices in the network," said said Zach Nestov, Product Specialist. "The points obtained over the BACnet network can be used in the BAScontrol22C's Sedona wire sheet application logic, become scaled, calculated, and/or converted to different data types, written to other BACnet devices, served up to BACnet supervisory controllers and operator workstations by using Virtual Components, as well as be monitored, displayed, or exposed for configuration on BAScontrol22C's web page by the use of Web Components."

The BAScontrol22C supports BACnet/IP Client and Server functionality using a 2-port Ethernet switch connection. The controller complies with the B-ASC device profile having a convenient mix of 8 universal inputs, 4 binary inputs, 4 analog outputs, and 6 relay outputs. In addition to 22 physical points, the BAScontrol22 has 24 Virtual Points for use in wire sheet and data exchange with BACnet supervisors.