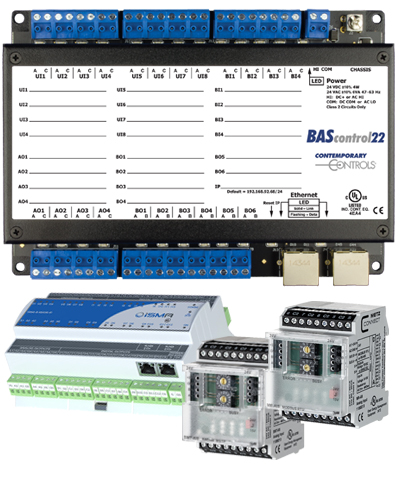 BACnet is the protocol of choice for the Building Automation industry and more manufacturers are incorporating BACnet support in their devices. For example, drives, chillers, energy meters which have traditionally been using Modbus protocol now have support for BACnet. Adding BACnet requires a commitment on the part of the manufacturer and is not trivial. There are other options available for equipment manufacturers that do not yet have BACnet support but want to offer BACnet to their customers.

Another option for systems with unused I/O, or systems that can have I/O added to them, is BACnet remote I/O because it can be used as a gateway to BACnet. For example, unused Analog Outputs from the non-BACnet device can be connected to BACnet remote I/O's Analog Inputs and now the system can communicate analog signals to BACnet clients. If the non-BACnet device has some relay outputs, these can be connected to remote I/O Binary Inputs and now they can communicate binary data to BACnet clients. Contemporary Controls offers Cube I/O and Configurable I/O with different I/O mix for integration to BACnet I/P or BACnet MS/TP.

If the above options with Remote I/O and BAScontrol Series for BACnet Integration don't work for your application, we are happy to look at a custom solution for your needs. Please visit the ODM page to learn more.

Understanding How to Configure OpenVPN