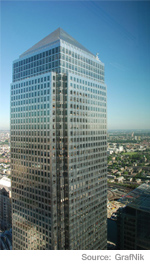 August 2010 - Contemporary Controls' managed compact switch, the EICP8M, provides the cable redundancy required by Cylon Controls' Ethernet-based building automation system in the United Kingdom's tallest skyscraper-Canary Wharf Tower. A hundred EICP8M switches are wired in a ring topology to ensure that a single cable break would not impact communication. Because standard Ethernet switches wired in a ring can cause endless loop transmissions, Contemporary Controls' managed switches utilize RapidRing technology, which protects against a loop while invoking a backup connection when a cable segment is broken. The changeover is very fast, thereby maintaining the integrity of the building automation system.

One Canada Square, more commonly called Canary Wharf Tower is the tallest building in the United Kingdom, measuring 236 meters. All upgrade works are conducted by the construction division, Canary Wharf Contractors Ltd. (CWCL). Working with CWCL means working with a culture of disciplined collaboration. Canary Wharf Tower's building control systems is provided by Cylon Controls Ltd., one of the largest privately-held manufacturers of building controls in Europe. The main network is BACnet/IP Ethernet implemented with Cylon Controls UC32.net/P controllers. The system integrator on the project was Eton Associates, Eton have extensive experience with both Trend and Cylon building automation systems.

Because real-time information for Cylon's Unitron Energy Manager is a requirement for Canary Wharf Tower, Cylon required an Ethernet network with cable redundancy. RapidRing is a proprietary ring network technology from Contemporary Controls that can provide recovery within 300 ms. The ring must specify one of its switches as the master to manage the backup link. When a cable break occurs, the master invokes the backup. Once the cable fault is repaired, the nearby switches notify the master which then restores normal operation by disabling the backup link. RapidRing supports multiple rings and can use either copper or fiber cable for the ring connections.

On each of the 50 floors at Canary Wharf Tower, two Contemporary Controls' EICP8M 8-port managed switches are installed. Two ports are designed ring ports with the remaining six usable as general purpose 10/100 Mbps Ethernet ports. There are two risers for Ethernet connections-one on the north side and the other on the south side. Ring connections are made from one floor to the next. The ring is completed at the very top floor and at the very bottom floor. One switch must be designated the master switch and it resides near the building manager's office. The master switch enables or disables the backup port based upon the state of the ring.

The EICP8M series are managed switches that support the Simple Network Management Protocol (SNMP), allowing all the ports in the ring to be monitored. Additionally, the EICP8M is designed with conventional features such as VLAN, trunking, Quality of Service (QoS), port mirroring, port security, rate limiting and a programmable fault relay that can be connected to a supervisory system. Individual port parameters and other feature settings are configurable via a console port or via web pages.

This story is also available as a PDF.