The Chinese government has identified wind power as a clean energy alternative to coal, triggering rapid growth in the highly competitive wind energy market in China. The northeastern province of Inner Mongolia is considered a prime location to develop wind farms due to the strong winds and available land. Contemporary Controls went on a three-day journey to the remote location to meet with wind farm engineers and help solve their needs for redundant Ethernet communication. 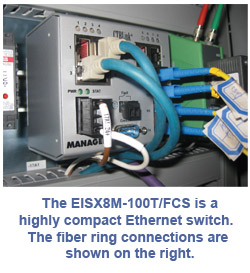 On a wind farm, each wind tower has a 1.5 MW turbine and controls at the top of the tower, and additional controls at the base of the tower. Up to 1,000 towers can occupy one wind farm. These towers communicate with a central control room over single-mode fiber optic cable in a ring topology. If the ring is broken at any one point, communication is not impacted due to the redundant path inherent in a ring topology. Situated in an outdoor environment, all the controls and Ethernet equipment must be able to tolerate extreme temperatures, lightning strikes, and potential electrical interference from high power turbines. Because the job site is so remote, the reliability of the equipment is a major concern. 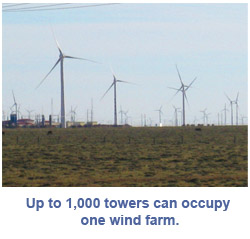 The Contemporary Controls EISX compact managed Ethernet switching hub met the needs of the project because of its outdoor temperature rating, its enhanced EMC compliance, its RapidRing® fiber ring redundancy, and its support of the SNMP protocol. The unit is extremely compact, providing six 10/100 Mbps copper ports and two single-mode fiber ports. In response to a customer request, firmware was modified to support several rings in order to comply with field cabling constraints.

This was an interesting project; but only represents the beginning of more projects as the world seeks out alternative sources of energy.