May 2012 – The BASrouter Status Screen is accessed via a button on the right side of the unit's main configuration page. This screen lists a variety of parameters that are updated when you manually refresh the page. Some parameters are for use by our engineers and are displayed only so you can take a screen capture of these values to send to us for study. Other parameters in the list can help you – even if you have little or no knowledge of the BACnet standard. Let's take a look these and discuss how they can help you gain insight into your network performance.

The first eight lines of the Status Screen report packet counts. Obviously, the number and frequency of messages received and transmitted for each supported network can tell you that data is successfully passing through the router – this is the fundamental benefit of these packet reports. Rarely will an Incoming and Outgoing packet count equal each other, but certain counts should be similar – as shown in our example and discussed below. 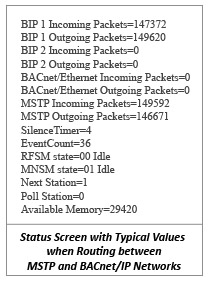 The primary BACnet/IP port is abbreviated BIP 1 and the secondary port is BIP 2. BIP 2 is only used in the uncommon situation in which the BASrouter must pass data between two BACnet/IP networks – but if that is the case, BIP 1 and BIP 2 packet counts should both be considered. In most situations these counts are similar, but sometimes they are not. If you are routing from BIP 1 to BIP 2, then most messages will be routed from one BIP network to the other – but some messages may be sent only to the router (for example, to read its properties) and are not destined for the other network. If your system is not reading the router properties, but you still see a large count discrepancy – then you may have an issue with your BACnet client and routing. We have seen some clients discover MSTP devices via our router – but then fail to use this routing information and try to read a discovered device's properties directly from our router. Our router holds only its own properties – it holds no properties for any other device.

Most BACnet communication over Ethernet employs the BACnet/IP protocol. Although rare, there are still instances in which the older BACnet/Ethernet protocol (ISO 8802-3) is used. Our routers allow these two protocols to communicate. BACnet/Ethernet uses Ethernet MAC addresses for station addressing – unlike BACnet/IP which targets stations by their Internet Protocol (IP) addresses.

The most common use of the BASrouter is to route between a BACnet/IP network and an MSTP network. In such cases, the BIP 1 and MSTP packet counts should be similar. If they are not similar, a server device may not be responding to messages or the client may be ignoring routing information.

Available Memory (at the bottom of the list) is the amount of RAM remaining after buffers have been allocated. If a network is temporarily offline and another attempts to communicate with it, the available memory may drop very low until the offline network returns to an online condition. This value should reflect minimal change each time the screen is refreshed.

The remaining six reports deal with the instantaneous MSTP state of the BASrouter and are explained in the BACnet standard. These reports are mainly for our engineers, but you can observe changes and sometimes gain insight into the MSTP network condition (as seen by the BASrouter). These six reports are the following:

SilenceTimer should count up and then reset to 0. If the count exceeds 500, the BASrouter must think it is the only device on the network.

The EventCount and RFSM reports are only for study by our engineering group.

MNSM (Master Node State Machine) state can give some information about what is occurring. The states are:

MNSM will cycle through these states as you refresh the screen. Usually the state is Idle, but you should periodically see one of the four token messages – confirming the BASrouter is passing the token to other devices. However, if you only see Idle and Poll For Master, the router must think there are no other devices. If other MSTP devices are present, check for one of the following possibilities:

* The BASrouter can terminate one end, but you must terminate the opposite end.

Learn About the Scalable Building Strategy at Niagara Summit

Simple to Use Modbus to BACnet Gateway