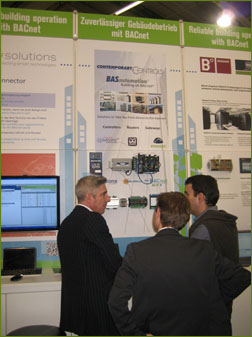 May 2014 - Contemporary Controls participated in the BACnet Europe stand during this year's Light+Building show that ended April 4. The show announced a record attendance of 211,500 visitors for this six-day event featuring the latest in lighting and building automation technologies from 2,458 exhibitors. This was the fifth straight show in which Contemporary Controls participated. This bi-annual show is truly international with 47% of the visitors coming from outside Germany.

The BACnet community in Europe is vibrant and it was a good opportunity to interact with others in the community and discuss ways to strengthen the standard as the leading protocol for the building automation in Europe. Mike Newman - the father of BACnet - was there signing copies of his new book "BACnet: The Global Standard for Building Automation and Control Networks."

He is considered a "rock-star" in Europe and it does not hurt that he speaks German.

To learn more about Contemporary Controls' involvement with EnOcean, you can visit the EnOcean website to read the press release.

Did You Know from Joe