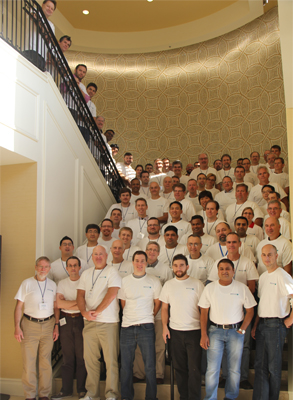 November 2014 - Contemporary Controls' engineers tested products for BACnet interoperability at the recent BACnet International PlugFest 2014. Annually, BACnet International, BACnet Testing Laboratories Working Group, invites manufacturers of BACnet products to attend PlugFests. PlugFests provide a valuable service by offering the opportunity for BACnet manufacturers to test the interoperability of their devices with other manufacturer devices in a neutral and friendly environment. Contemporary Controls has attended numerous PlugFests over the years and finds them very productive. PlugFest 2014 is the 15th annual BACnet interoperability workshop. The event was held in Charleston, SC.

Contemporary Controls BASautomation Products Tested
BACnet devices tested within the BASautomation product line included the BASremote, a BACnet/IP Controller/ Gateway; the BAScontrol20, a 20-point Powered by Sedona Framework™ field controller; the BASrouterLX, a high-performance BACnet router; the BASgatewayLX, a Modbus to BACnet gateway; along with a new product under development.

Over 90 Engineers Tested Products for BACnet Interoperability
Ninety engineers from over 30 building automation manufacturers tested the interoperability of their BACnet products with their industry counterparts. Different testing opportunities were available including: one-on-one testing sessions designed to allow each team to test their products with another company's products based on a formalized schedule, round table testing which allowed vendors to conduct unscheduled testing and various BACnet training sessions.

Another opportunity was the BACnet/IP and MS/TP round tables, as well as the All-In Session at the end of the event. Engineers used the event to connect prototypes and new developments and to gain valuable experience with the implementation of the BACnet standard.

"PlugFests have been great events for us to test our devices for interoperability with BACnet by physically connecting them into a running network between different vendors. These events allow us to identify and solve a perceived connectivity issue between vendors before the products get in customers' hands," mentions, Bennet Levine, R & D Manager, Contemporary Controls.

Besides helping manufacturers improve their interoperability, PlugFests facilitate in creating awareness about a standard, can improve transparency on compliancy and provide essential feedback to standardization organizations as well as to the developer community whose products are tested at the event.

Modbus Profile Builder Software for the BASgatewayLX is Now Available

Using the BASgatewayLX with a Rockwell MicroLogix PLC

Product and Portfolio Solutions for OEMS