BASpi-IO Keeps the Chickens Cooped Up 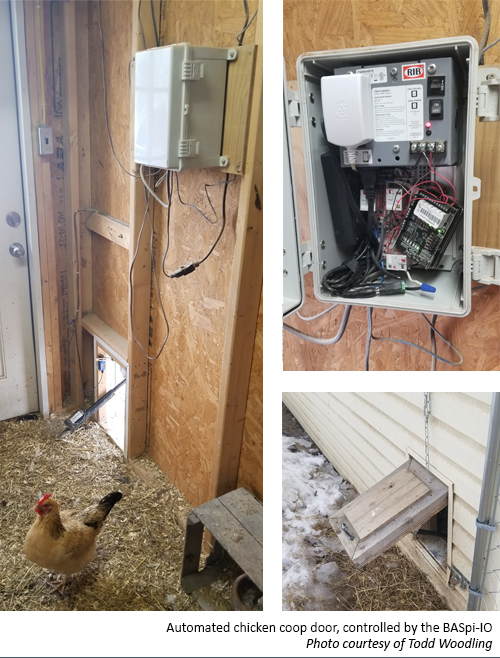 The BASpi-IO are 12-point BAS expansion boards for Raspberry Pi, making them an extremely popular and affordable tool for HVAC training programs. The open software and DIY nature of the BASpi-IO gives students the opportunity to assemble their own Sedona programmable BACnet-networked controller.

Many trainers like to test out the BASpi-IO before incorporating it into their classroom, which means we get to hear some truly novel uses of the BASpi. Todd Woodling, the Building Automation Engineering Technology Department Head at the Pennsylvania College of Technology, brought home a BASpi-IO to see if it would be suitable for a building automation training program. To test its capabilities, Woodling decided to use the BASpi-IO on his mini home farm.

Mini home farms are increasingly popular, but they demand a great deal of time and attention. Each day, Woodling needed to open the door to his chicken coop to let the chickens out, then close the door at night to keep them safe. Woodling wanted to incorporate an automatic chicken door which he could open and close remotely. This allowed Woodling to be anywhere, especially in the summer, and by viewing an IP camera, he could see if the chickens were in the coop and close the door.

The chicken coop was within his Wi-Fi network, so Woodling was able to take advantage of the fact that the BASpi-IO can be programmed and interfaced via Wi-Fi, unlike most building controllers. By utilizing the BASpi's built-in web server, Woodling can now activate the closing of the door from a webpage and can verify the door is closed by using a limit switch attached to one of the BASpi-IO's universal inputs. Another universal input was used to attach a thermistor for monitoring coop temperature.

The BASpi-IO was so successful at bringing building automation to the Woodling's chicken coop that he approved it for use when instructing DDC basics and networking. The BASpi-IO helps students learn to assemble and program building control hardware and software. The BASpi-IO is also great for livelihood of chickens.

Visit the BASpi-IO product page to learn more. Additional information about resources for HVAC programs is available on the Training and Education page.

BASpi-IO Keeps the Chickens Cooped Up