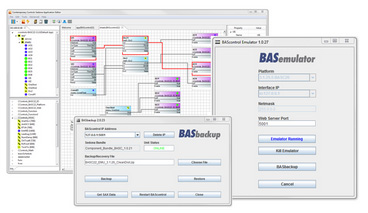 Contemporary Controls has just released its BASemulator which replicates on a PC the operation of the company’s BAScontrol series of open unitary controllers, thereby allowing sequence of operation (SOO) verification without having the actual controller. Using a PC, specifying engineers can now view the same program that will be used on the job to verify that it meets the engineer’s intended sequence of operation. For a contractor, programs can be developed, configured and then saved on a PC for eventual downloading to the intended controller at the job site.

The BAScontrol series of BACnet/IP unitary controllers are built on the Sedona Framework™. Sedona is an open-source technology that facilitates component-oriented programming where components are assembled onto a wire sheet, configured and interconnected, to create applications. The BASemulator is free and joins the other free Sedona tools such as the Sedona Application Editor (SAE) which allows for Sedona programming, and BASbackup which will save and restore all BAScontrol configuration and programming files as a project. Contemporary Controls believes that an open controller requires tools available to all without restriction.

Although the BAScontrol series is freely-programmable using Sedona, Contemporary Controls worked with system integrators to create application packages for common HVAC sequences used for RTUs and AHUs. Included in the packages are a system schematic, sequence of operation, points list and the actual Sedona program along with a pre-configured BACnet points file for loading into an actual controller or emulator. Using SAE, the program can be modified for the required sequence and saved using BASbackup.

The BASemulator faithfully mimics the operation of the actual controller including its web pages. It can even be "discovered" by a BACnet client on the same network as the attached PC. Although there are no physical connections to inputs and outputs, inputs can be "forced" via the configuration web pages and BACnet client commands are honored. It is the next best thing to a real controller.

The BASemulator is part of the BAScontrol Toolset, which also includes the Sedona Application Editor (SAE) and BASbackup - the BAScontrol Project Utility. Provided free of charge, these tools simplify controller programming and project archiving. All three programs are available as a single install sharing a common Sedona bundle of kits and components. Along with a common web browser, the toolset is all that is needed to commission a BAScontroller.

Go to the BAScontrol Toolset product page and login or create an account.

The Advantages of a BAScontrol Open Controller